A flickering gas lantern mounted on a bracketed shelf outside the front door of Brandon and Robin Bodell’s Draper home looks as if Robin casually set it there to guide her way indoors after horse riding in the neighboring pasture. The charming feature speaks volumes about the character of the couple’s newly built house, as well as the family’s lifestyle and their love of home.

As the principal of Brandon Bodell Construction, Brandon makes a living by building dream homes for select clients in northern Utah. To create the same for his own family, he and Robin purchased a dilapidated 1800s house on land that borders a horse property in Draper. While the dwelling was derelict, its site was heaven-sent for Robin. She’d grown up on an Idaho ranch and dreamt of one day riding her own horse in a pasture only a stone’s throw away from her family home. This property provided exactly that, so the Bodells removed the ramshackle house, making way for their new residence.

Brandon and Robin created a long list of the features they wanted in the house and had preliminary architectural drawings created to include them. The drafts were disappointing, but the couple couldn’t identify why. They turned to architect Bradford Houston for help.

“I told him 200 things we wanted in the house and explained that, while these plans have them all, they just don’t work,” Brandon recalls. Houston placed tracing paper over the drawings and began sketching, lightly tweaking the floor plan and fully reworking the exterior to bring forth coveted character. “The original drawings had all of the requested components, but the soul of the house was missing,” explains Houston, whose versions rejected many of the couple’s must-haves. The transformative tracings transfixed Brandon. “The best thing an architect can tell you is ‘no, it’s not good for the house,’” he says.

Houston looked to the pasture-sided property, mountain views and Draper’s rural past for architectural inspiration. “When I saw the property for the first time and I realized it sat facing a horse paddock, the style of the home just seemed to reveal itself,” says Houston, envisioning a traditional farmhouse. Robin’s love of horses and a childhood spent on a farm reinforced his concept. Dismissing thoughts of a modern farmhouse, Houston looked to historic precedence for guidance, including ideas derived from an old home in Park City. It was characterized by clapboard siding, an off-center entry, a forward gable and a picket fence. “While it isn’t a farmhouse, it presented the sense of homeyness and nostalgia we wanted to create,” says Houston, a self-proclaimed classicist with a preference for traditional styles.

Houston researched and conceived the new home’s exterior before addressing the final floor plans. “I spend a lot of time initially determining what the clients want the home to look and feel like, so there is consistency inside and out,” he says. Rejecting formal symmetry and materials at odds with a traditional farmhouse, Houston devised an asymmetric dwelling with a tucked-in, off-center entry, clapboard siding and broken-up structural massing that suggests an attached barn that serves as a garage.

Exacting the same level of authenticity and detail inside the home, Houston worked with the Bodells and interior designer Christie Lewis to create living spaces that look and feel consistent with the exterior’s style and materiality. In the handsomely paneled entry, for example, Houston rejected the owners’ idea of an exposed brick wall, explaining that while brick would appear authentic on a fireplace, using it to form an interior wall inside a wood structure would look out of place. For the same reason, he favored simple butt-jointed planking rather than a refined tongue-and-groove design for the wall and ceiling treatments. Houston’s discerning eye considered everything from proper door and ceiling heights to the ideal material flow to unique details including exposed rafters, transoms and gas lantern lighting.

Lewis curated the interior’s decorative elements with similar scrutiny. “A lot of thought went into creating a traditional farmhouse feel,” says Lewis, who worked closely with the Bodells to foster a feeling of integrity and comfort. Brandon’s masterful carpentry and construction created the ideal stage for the design. In the kitchen, for example, a fumed white-oak ceiling and a backsplash dressed in handmade Tabarka tile creates a compelling backdrop for a plastered hood, mixed painted and exposed grain finishes and flickering Bevolo gas lanterns. In the adjoining living room, anchored by a brick-trimmed, planked fireplace wall, Lewis paired a slipcovered linen sofa with cognac leather chairs and mixed contrasting fabrics and patterns to promote an informal, collected décor.

Lewis also chose a grounding blue paint for the handsomely trimmed mudroom and laundry. “The color not only adds personality, but it also complements the charming brick floors,” she says. The designer draped Thibaut fabric beneath the mudroom’s sink and repeated its pattern on the powder room’s walls for continuity. Other elements of note include the dining room’s custom hutch crafted by Benjamin Blackwelder, the spacious master bedroom’s pillow-laden window seats framing a soaring fireplace, and the master bathroom’s exposed rafter ceiling, planked walls and handmade tile floor.

In the end, the Bodells built the dream home they always wanted but hadn’t completely envisioned at the start. “We didn’t say we wanted a farmhouse; we said we wanted a family house,” Brandon recalls. By working closely with their talented team, Brandon and Robin created exactly that both for themselves and their four kids. 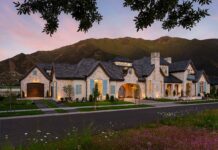 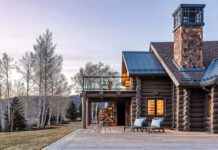 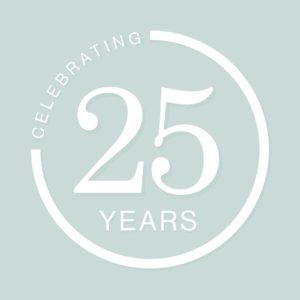